Detective Abernathy perched on the edge of the leather ottoman, staring in amazement at the most perfectly identical twins he had ever seen in his life.  Attractive brunettes in their mid-forties, they sat close on an expensive sofa, holding hands, exchanging nervous glances and stealing occasional brief looks at the portly middle aged man, dead in the doorway. 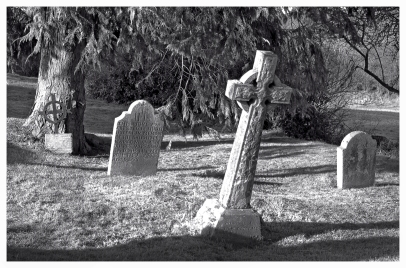 “Now… let me get this straight,” the detective questioned, “You’re saying you’re both Mrs. Roberts?”  His head inclined only the slightest degree, indicating the deceased.

“Well, technically…” began the sister on the left, “… Millie’s married to Carl, but we both, eh…that is, we… took turns… playing the part of wife!”

“But Margaret never had sex with Carl.”  The sister on the right added quickly, as if this detail somehow made the arrangement more appropriate. “Isn’t that right dear?”

“That’s right Millie.” replied the twin.  “Just as we agreed.”

The Detective eyed them curiously.  “And how exactly, did this…” he struggled for the precise word, “…relationship, work?

“Well…” Margaret continued, “…we’ve been swapping places for years, even as children.”  She straightened her blouse nervously. “Whenever Millie or I got tired, or bored with a situation, we would swap.  I’d take her place and she’d take mine.”  Millie sat silently but nodded in agreement. “It was always really quite easy, only mother could tell us apart.”

Abernathy stared at them in wonder.  Their similarities were amazing.  As he sat before the sisters, finding it impossible to distinguish any difference between them at all.

“So you would periodically swap places, taking turns at being the deceased’s spouse?  Living together for weeks or months, then just exchange your lives”

Millie spoke up. “Yes, it worked out wonderfully for us. Whenever we wanted a change, we’d just meet up and… exchange.”

“But surely, your… eh…husband…” Abernathy took quick turns looking from one sister to the other. “Surely, he noticed some incongruities in behavior.  I mean your physical similarities are incredible, but your daily interactions, your on-going conversations, your unique personalities, there must have been inconsistencies… your husband would notice?”

“Oh yes,” Margaret resumed, “…it was an endless source of frustration for Carl.  He never could figure it out.  I like roses while Millie prefers orchids.  Millie loves the Opera, while I detest it.  There were a thousand different little things that left him confused.” Margaret looked to her sister for support. “But I believe we treated him wonderfully, despite our little deception.”

The detective adjusted his tie slowly before proceeding. “And tonight?”

“It all happened so quickly.” Millie interjected.  “Carl returned home early.  We weren’t expecting him until tomorrow.  We didn’t even hear him come in.  We were just sitting here talking and then heard a gasp from the doorway, there.”  Millie pointed to the deceased and buried her face in her hands.

“He just grabbed his chest and fell over.” Margaret finished.

Abernathy struggled to comprehend the twin’s casual attitude towards the whole situation.  “I can see how it would be a tremendous shock for a man to discover that his wife was literally two different people.  He gathered his composure, trying to recover his professional disposition.  “Relationships are difficult under normal circumstances, but surely you can understand how seeing you both together would be a shock!”  The sisters tightened their grip on each other.

Abernathy continued.  “Of course I’m no doctor or psychiatrist, but it’s not hard for me to see how your husband may have had a physical or psychological reaction to this…this… discovery!  It’s enough to drive a person insane.”

“Randolph!  You mean you’ve carried out this deception on another man?” Abernathy was incredulous.

“Well four to be precise!” exclaimed Margaret. “Randolph in the State Sanatorium.  Malcolm – suicide.  And Vernon ran off with a Hawaiian girl.”

Abernathy sat stunned, taking it all in.  His cell phone vibrated in his pocket.

“Excuse me.” he apologized, glancing at his phone.  “It’s downtown.  I won’t be a moment.”

“How’s it going out there?” questioned the Police Chief on the other end of the call.

Abernathy walked to the far end of the room.  “I’m not sure if there’s been a crime.  But I have a lot of questions about what’s going on at my house.”

For what it’s worth.

I write for me. If you enjoy it, so much the better. Some of these stories are true. Most of the ones about murder are not. Have fun, I do! -rdfindlay
chrisallenartcom.wordpress.com/
thedrabble.wordpress.com/

The Shameful Sheep
When Stories Attack - A Humor Blog

Laughter is the Best Medicine. Besides Actual Medicine.